While news of chip shortages is now regular news fare, many believe it is temporary, the result of a post-pandemic demand surge for automobiles and other consumer products. But we view the shortage quite differently. Going forward, we believe chip availability could be the choke point for most tech-related buildouts over the next decade.

For stocks of semiconductor manufacturers and the equipment companies that supply them, this may have big implications. The industry’s inherent cyclicality has limited the price to earnings multiple on these stocks. We believe a paradigm shift in demand, coupled with a favorable competitive structure for the industry, could cause multiples to re-rate as the market comes to appreciate how strong demand could actually be.

5G Deployment: It is important to note that the three major  telecommunications carriers have already invested almost $80 billion in spectrum alone, and thus, are highly incentivized to turn that into revenue.

So far, 5G has been a premium feature on $1000+ smartphones but it is quickly becoming mainstream. Consumers are adopting 5G at three times the speed of the 4G introduction a decade ago. Prices are falling rapidly and smartphone manufacturers have introduced sub-$500 5G phones. New component designs are driving down costs even as the price of chips, like modems, are double the levels of 4G generation models. Savings are being made by offering fewer bands for connections and excluding millimeter band technology, which offers speeds most users do not need or use.

Electric Vehicle (“EV”) Adoption: Electrical vehicle adoption is another secular force creating more chip demand. Current projections call for growth from 11% of auto sales in 2020 to an estimated 60% by 2030 (source: Wall Street Journal). That would imply more than 60 million EV units would be sold. We think it is likely that government policies, emission control demands and technology improvements, which reduce costs and improve performance, will move these estimates even further upwards. As EVs become more commonplace, the demand for chips is significant: semiconductor usage is twice as prevalent in an EV than in an internal combustion engine-powered vehicle.

Other secular demand drivers: We have talked in prior blogs and materials about EV adoption and 5G driving a new – and different – demand cycle for chips, but they aren’t the only forces at play. Chips are the virtual building blocks of the digital economy. Virtually every emerging investment cycle in the tech sector that we can think of – from the cloud to the Internet of Things – depends on chips.

The industry offers high growth and rising barriers to entry due to both technology hurdles and high capital intensity. For these reasons, the industry has sharply consolidated in recent years; for example, the top three chip manufacturers hold 87% of the dynamic random-access memory (“DRAM”) market and 78% of the NAND market (source: Credit Suisse).

Manufacturing technologies are proprietary and highly sophisticated and the supply of a well-trained labor force necessary to make it all work is limited. For these reasons, it is very difficult for new chip companies and even equipment suppliers to enter the market and compete to meet rising demand.

Given secular demand drivers and favorable competitive dynamics, we believe semiconductor manufacturers and their equipment suppliers represent some of the best investment opportunities within the broader technology sector. As such, they currently remain one of our major thematic areas of investment focus. 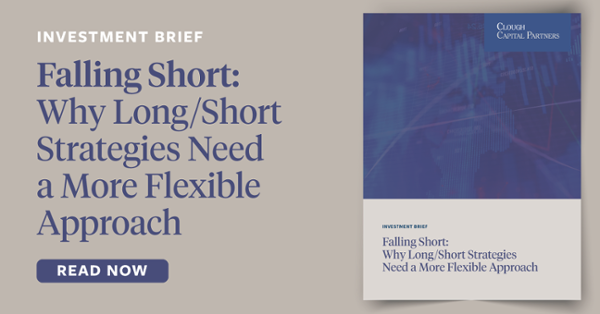 Tags: Global Macro Views
View All Posts
This site uses cookies to enhance your website experience. By subscribing to receive our insights, you are agreeing to our use of cookies. Please click here for the full terms and conditions of using the Clough Capital website.
Although not generally stated throughout, the views described herein reflect the opinion of Clough Capital Partners L.P. (“CCP”), which opinion is subject to change and none of CCP, its affiliates or any funds or products they manage shall have any obligation to inform you of any such changes.
Nothing contained herein constitutes investment, legal, tax, accounting, financial or other advice nor should be relied upon in making an investment or other decision. Nothing herein should be considered an offer to sell, nor a solicitation of an offer to buy, any security in any fund managed or sponsored by CCP or any of its affiliates, or any other investment product or security. Offers to sell or solicitations to invest in any funds may be made only by means of a prospectus or a confidential offering memorandum, and only in accordance with applicable securities laws. Investing involves risk, including the risk that the entire amount invested may be lost. Investors should consider the investment objective, risks, charges and expenses of any investment product carefully before investing and should consult their own professional advisors prior to making any investment decision.
None of CCP, its affiliates nor any funds or products that they manage or sponsor makes any representation or warranty, express or implied, as to the accuracy or completeness of the information contained herein and nothing contained herein shall be relied upon as a promise or representation as to past or future performance of any fund or product. Past performance is neither a guarantee, nor necessarily indicative, of future results, which may be significantly affected by changes in economic and other conditions.
Any outlooks or estimates contained herein, or any projections of future economic, financial or other conditions, are forward-looking statements and, as such, are subject to change without notice and should not be construed as indicative of any actual events that have occurred or may occur. No representations are made that any such forward-looking statements will prove to be accurate. There is a substantial likelihood that at least some, if not all, of the forward-looking statements included herein may prove to be inaccurate, possibly to a significant degree.